After staying for the night, VH-PNY returned to Sydney on Thursday 7 June.

As shown above, it was interesting to note that the smart little bizjet has received a new more corporate livery including the addition of 'Falconair' titles.

Meanwhile, out at Longreach Airport, the familiar sight of Gulf Coast Aviation Cessna 510 Citation Mustang bizjet VH-KXM was back after dark also on Thursday 7 June.  It arrived from Vanrook Station near Normanton and later departed to Bankstown.

VH-KXM was due to call into Longreach Airport the previous day but ended up flying from Bankstown to Mount Isa where it spent the night. 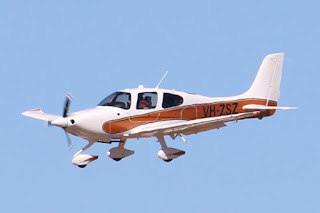 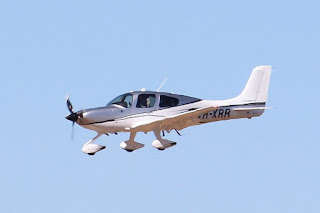 Both departed the next day.

Finally, on Monday 4 June, LifeFlight (Aeromed) LearJet 45 bizjet VH-CXJ "Ambulance 452" was noted arriving into Emerald Airport from Townsville.  It then departed to Brisbane.