On Saturday 2 June, the unique sound of Papua New Guinea (PNG) registered Columbia Helicopters (USA) Boeing-Vertol 234UT Chinook helicopter P2-CHJ was heard in the skies over CQ as the big civilian chopper called into Mackay and Emerald Airports while on what looks to be a ferry flight South from Cairns and Townsville.


Like previous ferry flights South from Papua New Guinea (PNG), I presume the big civilian Chinook helicopter will ferry into the Melbourne docks where it will be shipped back to the United States of America (USA) - reportedly a 21-day journey!


It appeared that P2-CHJ stayed for the night at Emerald Airport (where it is pictured above) and looked to continue South on Sunday 3 June.

UPDATE!  As predicted, on Monday 4 June, P2-CHJ was spotted Melbourne (Essendon) Airport where it will stay before flying to the Melbourne docks.

UPDATE!  We've received these stunning photos below of P2-CHJ at the Melbourne docks being loaded on board a ship bound for the USA late on Sunday 10 June.  Thanks to the contributor for sending them through! 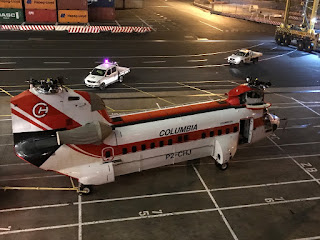 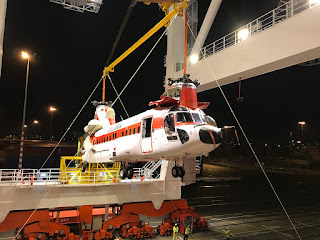 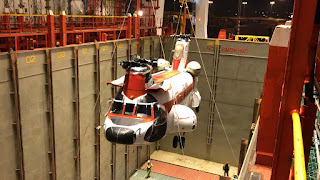 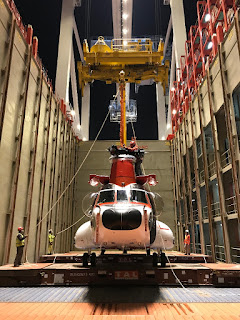 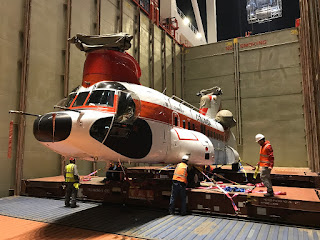 P2-CHJ (C/N MJ-022) is a 1985 build tandem rotor chopper that is leased by Columbia Helicopters (PNG) from Columbia Helicopters Inc (CHI) in the USA.  It is one of several based in the Southern Highlands base of Moro that reportedly work on petroleum exploration operations in PNG, flying entire petroleum drilling rigs piece by piece over the top of PNG's ecologically sensitive rain forests.  See more at:  http://www.colheli.com/aerial/oil-and-gas/#sthash.FnNsZ37T.dpuf

Columbia Helicopters Inc (CHI) is an aircraft manufacturing and operating company based in Aurora, Oregon, in the United States of America (USA). They are known for operating tandem rotor helicopters - presently the Boeing-Vertol 107 and Boeing-Vertol 234. These helicopters are primarily used in stream restoration and forestry operations including heli-logging, oil exploration, fire suppression, construction, government support, film production, disaster response and many other activities. In addition the company operates a large FAA Repair Station supporting customers around the world.

It's always great to see these big Columbia Chinook helicopters in CQ!

Photos taken by Leroy and Michael Martin  ©
Posted by Damian F at 9:54 PM