Over the last couple of days, the visiting pair of Royal Australian Air Force (RAAF) Alenia C-27J Spartan transport aircraft have been noted coming and going from Rockhampton Airport and the nearby Shoalwater Bay Training Area (SWBTA). 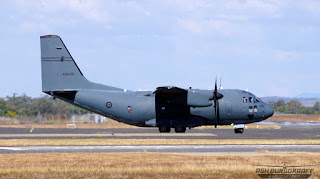 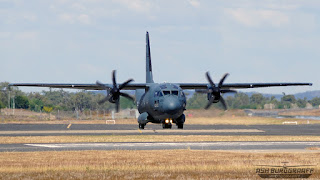 On Monday 11 June, A34-005 was photographed above departing Rockhampton Airport for RAAF Base Amberley as "Wallaby 05".

Then on Tuesday 12 June, the other Spartan A34-006 was also spotted departing Rockhampton Airport also for Amberley but as "Wallaby 03". 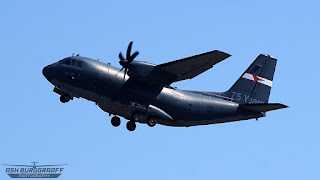 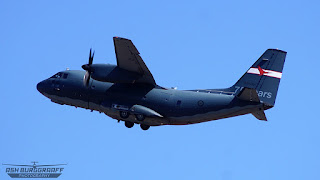 UPDATE!  During the night on Tuesday 12 June, A34-005 "Wallaby 05" returned to the Shoalwater Bay Training Area from Amberley before then heading back to Rockhampton Airport where both Spartans remained parked for the remainder of the night.

Finally, of interest, another interesting RAAF movement around CQ on Tuesday 12 June saw an unidentified RAAF Lockheed AP-3C Orion complete airwork around Longreach Airport.  It was heard flying as "Striker 60" and appeared to fly up from the South-West.  After completing the airwork, the Orion continued to Townsville.

Sincere thanks to local plane spotter Ash B for allowing us to share his great photos of the Spartans!

All photos taken by Ash Burggraaff  ©
Posted by Damian F at 7:46 PM