On Wednesday 14 October, Royal Australian Air Force (RAAF) Boeing B737-7DT(BBJ) A36-001 "Envoy 90" returned to Rockhampton Airport from Townsville.  It had called in the previous day and looked to drop off passengers before heading to North Queensland (as shown). 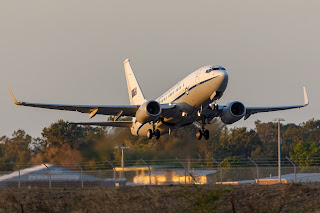 On this occasion, A36-001 "Envoy 90" then departed Rockhampton Airport returned to Townsville.
Meanwhile, also on Wednesday 14 October, RAAF Airbus A330-200 / KC-30A Multi Role Tanker Transport (MRTT) A39-003 was noted flying North from RAAF Base Amberley to Cairns as "Dragon 40".  It then flew South to complete two missed approaches at Rockhampton Airport. 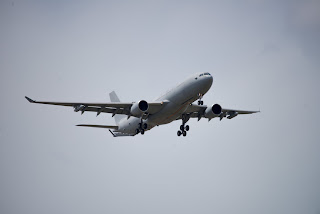 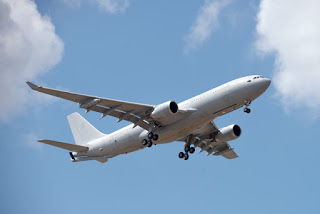 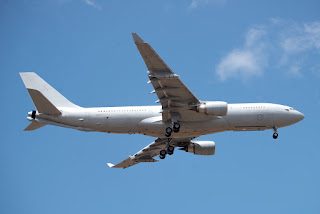 A39-003 then flew back from Rocky to Townsville where it landed for a short time before eventually returning to Amberley.
Finally, after flying North the previous day - see Blog post below - also on Wednesday 14 October, the pair of RAAF Boeing P-8A Poseidon Maritime Surveillance Aircraft were noted back in CQ while flying back to Edinburgh from Townsvlle.
A47-002 as "Mariner 03" came down from Townsville and completed a missed approach at Mackay Airport before flying on to the Gold Coast and RAAF Base Williamtown before heading to Edinburgh. While A47-008 as "Mariner 04" came down to also complete a missed approach also at Mackay Airport before flying on to Brisbane and RAAF Base Richmond before also heading to Edinburgh.
Photos taken by Steve Vit and Scott Harris  ©
Posted by Damian F at 8:49 PM