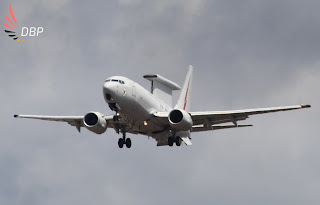 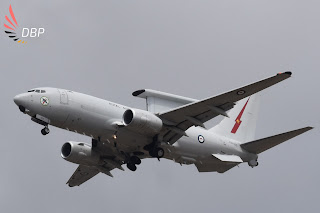 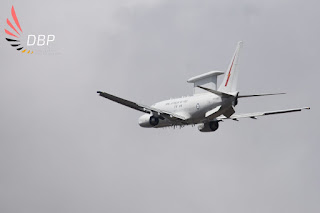 It appears that the Wedgetail flew up from RAAF Base Williamtown at Newcastle and completed a missed approach at Brisbane before heading to Bundy.  After completing the airwork, A30-003 continued further North where it completed more airwork at Hamilton Island Airport before then returning back directly to Williamtown.
Earlier in the morning, fellow RAAF Wedgetail A30-001 "Wedgetail 11" also flew up from Williamtown and completed a missed approach at Coffs Harbour before then heading towards Rockhampton.  However, Air Traffic Control (ATC) at Rockhampton Airport indicated they couldn't take the Wedgetail due to being too busy and the Wedgetail turned back and completed multiple circuits at the Sunshine Coast.  It then returned to Williamtown via Port Macquarie.
Meanwhile, also on Wednesday 28 October, RAAF Boeing C-17A Globemaster III A41-213 "Stallion 57" flew up from RAAF Base Amberley to the Shoalwater Bay Training Area (SWBTA) via low pass overhead Rockhampton.  In the training area, it reportedly completed an air drop as a part of an Australian Army training exercise.
A41-213 then then climbed back to mid flight levels via overhead Rocky again before then tracking back to Amberley via Gayndah and Murgon.
Sincere thanks to Dan B from Dan Beck Photography for allowing us to share these great photos!