On Friday 2 October, Edwards Coaches Cessna 525 Citation CJ1 bizjet VH-KXL was noted visiting Mackay Airport.  It looked to arrive directly from its Armidale base in New South Wales and later returned there but via the Gold Coast.


A couple of other corporate bizjets to be noted departing a couple of Central Queensland Airport, also on Friday 2 October, included the Queensland Government Airwing (State of Queensland) Raytheon Hawker 850XP bizjet VH-SGY which finally departed Moranbah Airport for Brisbane.  It had arrived there on Tuesday 29 September and appeared to possibly suffer a technical issue.
While Gulf Aircraft Cessna 680 Citation Sovereign bizjet VH-PYN was spotted at Proserpine (Whitsunday Coast) Airport before it later departed for Brisbane.  It had arrived from there on Tuesday 29 September. 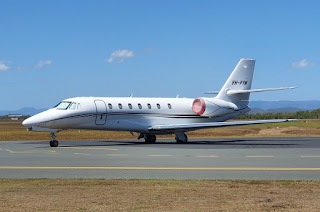 And Greensill Aviation Cessna 550 Citation Bravo bizjet VH-CCJ was noted returning to its Bundaberg Airport base from Adelaide and Sydney.  It had flown South two days prior - see Blog post below!
Meanwhile, some other light General Aviation (GA) and helicopter visitors to CQ Airports, also on Friday 2 October, included Townsville Airlines Beech 1900D VH-RUE which was noted visiting Maryborough and Rockhampton Airports while on a busy day of flying out of and back to Cairns all the way down to Brisbane.  Possibly, again, VH-RUE is completing flights on behalf of the Queensland Police Service.
Handel Aviation Cessna 402C VH-UCI departed Rockhampton Airport for Mackay Airport but was noted completing an aerial survey North of Mackay before landing.
And American-registered but Australian-based Cirrus SR22T N931DW departed Hamilton Island Airport for the Sunshine Coast.  It had arrived into Hamo from there the previous day.
Finally, Flight Training Adelaide (FTA) / Qantas Group Pilot Academy Diamond DA-40 Star training aircraft VH-YTU and VH-YTI were noted in the region, visiting Rockhampton and Gladstone Airports, and Hervey Bay (Fraser Coast) Airport respectively while on flights out of and back their Toowoomba-Wellcamp base.
Photo taken by James Kirk  ©
Posted by Damian F at 8:08 PM