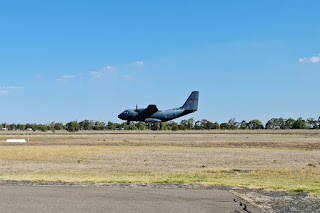 The Spartan looked to fly up from RAAF Base Amberley to complete the airwork at Roma Airport before being photographed completing one of four touch-and-go's at Emerald Airport.  A34-008 then continued north to Townsville.
Of interest, A34-008 was heard to be using the radio callsign of "Kaos 46".
UPDATE!  On Saturday 17 October, A34-008 "Kaos 46" continued to the top of the state with airwork at Horn Island, RAAF Base Scherger and back across to Lockhart River before now heading down to Cairns and back to Townsville.
Photo taken by 'AC'  ©️
Posted by Damian F at 8:46 PM