Also on Friday 9 October, a pair of Royal Australian Air Force (RAAF) Boeing C-17A Globemaster III transport aircraft were noted and spotted completing airwork in parts of Central Queensland, as well as completing missed approaches at Bundaberg Airport.
C-17 A41-208 as "Stallion 35" flew up from RAAF Base Amberley at low level to South East of Gayndah before climbing and heading to Bundy before completing a missed approach at Bundaberg Airport. 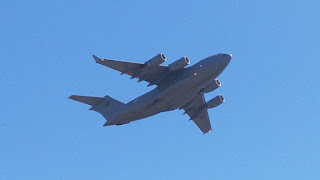 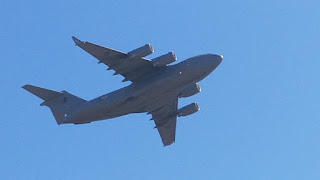 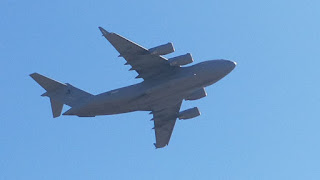 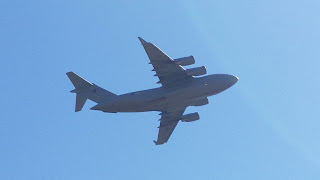 It then flew back down along the coast to then complete air-to-air refueling exercises off the coast of South-East Queensland with RAAF Airbus A330-203 / KC-30A Multi Role Tanker Transport (MRTT) A39-007 as "Dragon 20".
A little later, C-17 A41-209 as "Stallion 36" also flew up from Amberley but to complete air-to-air refueling exercises with the KC-30A "Dragon 20" before then flying back via an inland route towards Gayndah and then Bundy where it too completed a missed approach at Bundaberg Airport.  The C-17 then returned to Amberley.
Nice!
Sincere thanks local plane spotter Peter S for taking the time to capture and send through these great photos and video!
Photos and video taken by Peter Sajko  ©
Posted by Damian F at 10:28 PM