On Wednesday 21 October, Mackellar Mining Equipment / Flight Options (Australia) Cessna 560 Citation Ultra bizjet VH-MMC was noted visiting Middlemount Aerodrome.  It looked to arrive from and then later depart back to its Sunshine Coast base.

Meanwhile, a couple of light General Aviation (GA) movements around Central Queensland Airports also on Wednesday 21 October included a brief visit into Rockhampton Airport by the Queensland Government Airwing (State of Queensland) Raytheon B300 Super King Air VH-SGQ.  It arrived from Townsville and departed to Brisbane.
While after a long absence grounded in Cairns, the Queensland Police Service (Airwing) (State of Queensland) Raytheon B1900D VH-PSK was back in the air and calling into Rockhampton Airport during a busy day of flying between Cairns and Townsville to and back from Brisbane.
Also on on Wednesday 21 October, Seair Pacific / Istelcote De Havilland DHC-6-100 Twin Otter VH-ZKF was again noted at Rockhampton Airport operating the weekly Fly-in Fly-out (FIFO) closed charter flight from the Gold Coast and Brisbane to Rocky then up to Collinsville Aerodrome and Townsville.  As usual, VH-ZKF later returned South over the same route.
While earlier in the day, fellow Seair Pacific / Istlecote Cessna 208 Caravan VH-TQW was noted arriving into Rockhampton Airport but from Hervey Bay (Fraser Coast) Airport.
At the time of writing, it appears that VH-TQW spent the day parked and is due to depart to Middlemount Aerodrome early on Thursday 22 October before it then heads South to Maryborough and Hervey Bay (Fraser Coast) Airports.
And spotted on the Rockhampton Airport GA Apron, also on Wednesday 21 October, was Air Gold Coast Beech 58 Baron VH-YDC.  It had earlier arrived from Townsville and then departed to Kingaroy and Archerfield. 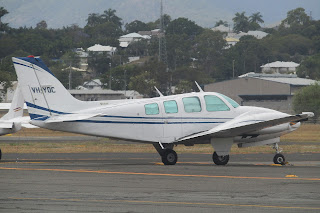 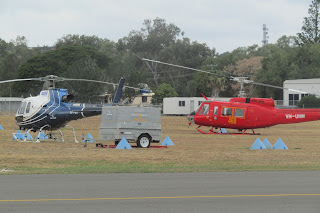 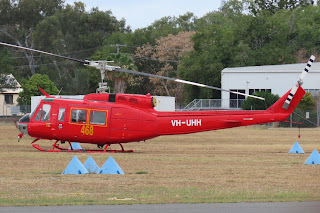 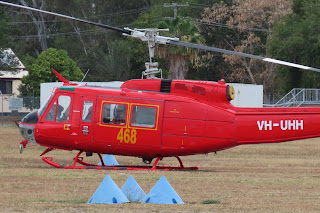 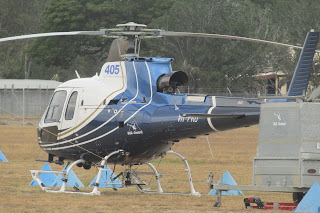 Finally, Brescon (Toowoomba) Beech B200 King Air VH-WXN looked to make its weekly trip to Labona Station Airstrip within Adani Australia's Carmichael Coal Mine site from Toowoomba-Wellcamp but flying via Clermont Aerodrome.  At the time of writing, it was due to return to Wellcamp, again via Clermont Aerodrome, early on Thursday 22 October.
Photos taken by Trevor Hardsman and Kayanne Hardsman  ©
Posted by Damian F at 10:02 PM