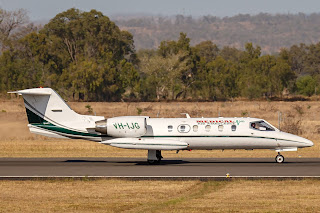 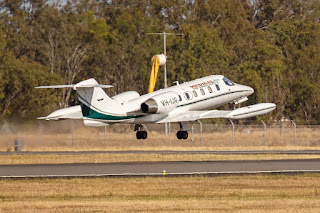 It had arrived the previous day from Perth and again was noted using the radio callsign of "Ambulance 635".
Of interest, from Darwin, VH-IJG then departed to Pattimura, Ambon, Indonesia then Mactan-Cebu in the Philippines.
Meanwhile, spotted visiting Rockhampton Airport, also on Tuesday 20 October was the recently re-painted and re-branded Link Airways (Corporate Air / Vee H Aviation) SAAB 340B VH-VEB.  It touched down from Brisbane the previous day and departed to Townsville later on Tuesday.

Corporate Aviation Bell 429 helicopter VH-EQP looked to call into Biloela / Thangool Airport from Caboolture.  It then looked to be flying around Mackay and Moranbah Airports before landing at and looking to spend the night at Emerald Airport.
UPDATE!  On Thursday 22 October, VH-EQP departed Emerald Airport and looked to fly to Middlemount and Mackay Airports before returning to its Southport base again via Biloela / Thangool Airport.
And Great Western Aviation Beech B200 VH-XGV made its weekly visit to my local Clermont Aerodrome, arriving from and later departing back to Brisbane.
While Machjet (Machjet International) Hawker Beechcraft B200 King Air VH-ZSY flew up to Rockhampton Airport from the Sunshine Coast before later departing to Julia Creek and Cloncurry.  It then returned to the Sunny Coast.
Finally, also on Tuesday 20 October, Diamond DA-42 N181CW arrived into Longreach Airport from Archerfield and Toowoomba-Wellcamp. It looked to fly up from Bankstown on Monday 19 October.
UPDATE!  On Wednesday 21 October, N181CW departed Longreach Airport for Tennant Creek and Broome in Western Australia.
Posted by Damian F at 9:11 PM