After a couple of hours on the ground, VH-SGQ then continued up to Rockhampton Airport where it appears to be spending the night parked.
VH-SGQ is due to return to Brisbane from Rockhampton Airport on Friday 23 October.
Meanwhile, also spotted at Bundaberg Airport, also on Thursday 22 October, were a pair of McDermott Aviation / Heli-Lift Australia bushfire fighting helicopters in the form of Bell 214B-1 Biglifter helicopter VH-SUH "Helitack 417" and Aerospatiale AS.355F1 Squirrel VH-RLR "Helitack 460". 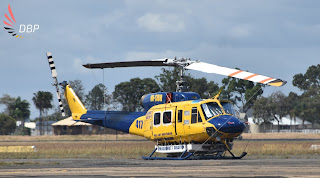 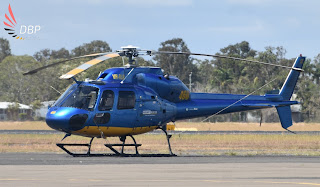 Finally, also on Thursday 22 October, the familiar sight of Corporate Aviation Bell 429 Global Ranger helicopter VH-EQP was back in CQ.  It looked to depart Emerald Airport for (possibly) Middlemount, Mackay and Biloela / Thangool Airports.  It then returned to its Southport base.
VH-EQP had flown North on Tuesday 20 October - see Blog post below!
Sincere thanks to Dan B from Dan Beck Photography for allowing us to share these great photos!