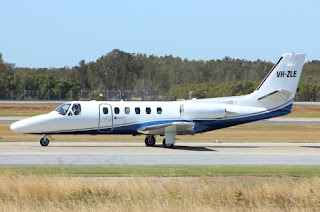 The familiar Citation which is possibly operating for Queensland Health (through LifeFlight) looked to arrive from and then later depart back to its Brisbane base.
UPDATE!  As this post is being written, late on Friday 9 October, VH-ZLE has returned to CQ, this time popping into Rockhampton Airport, again arriving from and later departing back to Brisbane.