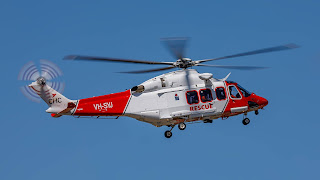 VH-SYJ arrived into Rocky direct from Townsville and was heard to use the radio callsign of "Choppa 42".  It later departed to Amberley.
The Agusta operates for the Royal Australian Air Force (RAAF) in a Search and Rescue (SAR) role by CHC Helicopters / Lloyd Helicopters.
VH-SYJ has spent the last couple of weeks in Townsville where it participated in support of the RAAF's Exercise Nigrum Pugio - an Asutralian Defence Force (ADF) Joint Terminal Attack Controller requalification activity held at the Townsville Field Training Area.
The RAAF deployed eight Boeing F/A-18F Super Hornets from Number 1 Squadron at RAAF Base Amberley to RAAF Base Townsville for Exercise Nigrum Pugio which was held from 1 – 16 October 2020.
All eight Super Hornets also returned to Amberley from Townsville, also on Friday 16 October, flying a coastal route, including through the Whitsundays, as a formation of seven as "Cannon Combined" and one as "Carbine 22".
Photos taken by Steve Vit and Ian Hitchcock  ©
Posted by Damian F at 8:30 PM