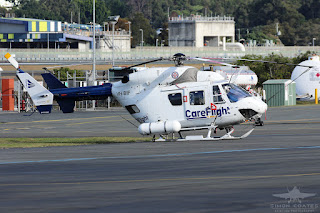 VH-BIF was heard to be using the radio callsign of "Careflight 4" and appears to be returning to the Eastern Seaboard after spending some time operating out of Darwin.
UPDATE!  VH-BIF is pictured parked at the Gold Coast Airport on Monday 6 September.
Photos taken by Russell Prothero and Simon Coates  ©
Posted by Damian F at 9:15 PM