As expected on Wednesday 1 September, Link Airways (Corporate Air / Vee H Aviation) Metro 23 VH-VET visited Rockhampton Airport on yet another seemingly Fly-in Fly-out (FIFO) charter flight.  It arrived from Brisbane then departed back to there. 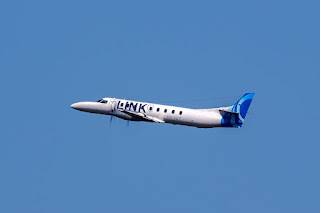 Meanwhile, also on Wednesday 1 September, Raytheon A36 Bonanza VH-YGM finally departed Rockhampton Airport for its Orange base in New South Wales.  It seems to have been based out of Rockhampton Airport since June.
The Queensland Police Service (Airwing) (State of Queensland) Raytheon B1900D VH-PSK was spotted also visiting Rockhampton Airport.  It arrived from Cairns and then departed to Hervey Bay (Fraser Coast) Airport before returning to Cairns. 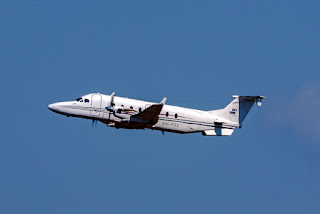 While out West, American Registered but Australian based Pilatus PC-12/47E N81DW was noted flying up from the Sunshine Coast to the Labona Station Airstrip within Adani Australia's (Bravus Mining & Resources) Carmichael Coal Mine site.  It then flew down to Emerald Airport for parking.

UPDATE!  On Thursday 2 September, N81DW departed Emerald Airport again for Labona before then flying back down to the Sunshine Coast.

Brisbane-based Hewitt Cattle Australia P/L SOCATA TBM 700 VH-PGA was noted flying into Emerald Airport from Archerfield and Dalby before it then departed to Toowoomba.
BK Hire (Toowoomba) Piper PA-31-350 Navajo VH-TTX was noted completing its weekly flight from Toowoomba up to Collinsville Aerodrome via Emerald Airport and back.

And Gulf Coast Aviation Cessna 510 Citation Mustang bizjet VH-KXM was noted departed Emerald Airport for Normanton and Ingham.  It then flew into Rockhampton Airport from Ingham and departed to Cairns.
VH-KXM had arrived into Emerald Airport late on Tuesday 31 August.
Finally, also on Wednesday 1 September, Hinterland Aviation Beech B200 King Air VH-HJS flew into Labona from Cairns as "Hinterland 100" before it then completed two flights to my local Clermont Aerodrome and back to Labona as "Hinterland 101/2" and "Hinterland 103/4".  VH-HJS then returned to Cairns from Labona as "Hinterland 815".
All photos taken by Steve Vit  ©
Posted by Damian F at 9:37 PM