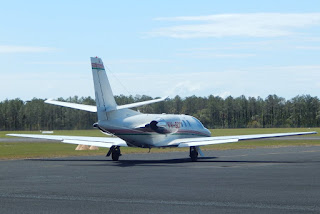 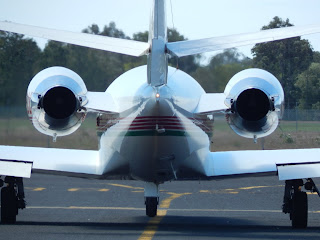 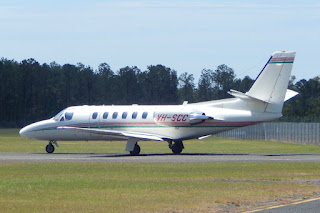 It looked to fly up from and later return to the Sunshine Coast and was reported completing a training flight.
The sleek Citation bizjet has completed two days of training flights with it noted at Bundaberg Airport on Monday 20 September.

A couple of other bizjets around the place, also on Tuesday 21 September, included Brenzil Dassault Aviation Falcon 7X bizjet VH-CRW which flew to Hamilton Island Airport from Brisbane and then back before then returning to Hamo for at least the night.
While recently delivered Stroud Aviation and Transportation (Boonah) Cessna 510 Citation Mustang bizjet VH-SHI visited Proserpine (Whitsunday Coast) Airport from Archerfield.
Meanwhile, also on Tuesday 21 September, Brisbane-based FIFO Jet P/L Beech B200 King Air VH-FAQ departed Rockhampton Airport for the Labona Station Airstrip within Adani Australia's (Bravus Mining & Resources) Carmichael Coal Mine site.  It then returned to Rockhampton Airport and then flew back to Labona and back to Rocky.  VH-FAQ then departed Bundaberg Airport and Archerfield.
VH-FAQ had arrived into Rockhampton Airport from Archerfield and Bundaberg Airports on Saturday 18 September.
And Link Airways (Corporate Air / Vee H Aviation) SAAB 340B VH-VEP visited Rockhampton Airport from Brisbane.

Finally, also on Tuesday 21 September, The Recreational Flying Company Cessna 421C Golden Eagle VH-UTC popped into Bundaberg Airport from Gympie before then heading out to Longreach Airport.  VH-UTC then flew to the Sunshine Coast.

And West Coast Seaplanes (Broome, Western Australia) Textron (Cessna) 208 Caravan VH-NPZ, which currently appears to be based at Bundaberg Airport, flew up once again from there to Nebo Aerodrome before it then flew down to Gladstone Airport and back to Bundy.
Sincere thanks David G of Maryborough Aviation Services for taking the time to capture and send through this great photo!
All photos taken by David Geck  ©
Posted by Damian F at 8:25 PM