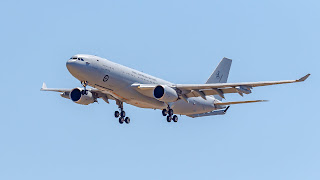 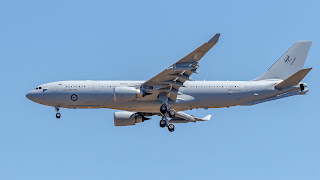 The MRTT flew down from Cairns to Rocky at 14000 feet and after completing the airwork at Rockhampton Airport, it continued down to Brisbane Airport where it completed another missed approach before landing.  A39-006 then popped across to RAAF Base Amberley.
A39-006 looked to have flown North from Amberley via airwork in parts of the Northern Territory on Monday 13 September.
A39-006 was heard to be using the radio callsign of "Dragon 33".

Of interest, this was the first time we've sighted A39-006 in Central Queensland since its recent re-paint.

On their entry to RAAF service, the KC-30A fleet initially carried a ‘low-visibility’ grey colour scheme brought over from the predecessor Boeing B707 Tanker Transports. This included the aircraft’s identification numbers, emergency markings, RAAF roundels and squadron insignia being applied in blue grey paint.

Difficulty with identifying individual KC-30As on the tarmac and in the air will see the existing blue-grey markings swapped with dark grey markings that have higher contrast with the light grey applied to the rest of the aircraft.

There appears to be now four of the seven KC-30As to have received these new markings with the dark grey markings to be applied on each KC-30A as it comes due for scheduled repainting.


It certainly makes it a lot easier for us plane spotters to identify the KC-30A with a repaint program applying dark grey markings to the aircraft.
Sincere thanks to local photographer Steve V for allowing us to share these great photos!
Photos taken by Steve Vit  ©
Posted by Damian F at 9:30 PM