A bit of an incident captured by local plane spotters and photographers during the afternoon on Tuesday 14 September with the second Skytrans Airlines Dash-8-100 service into Rockhampton Airport suffering landing gear problems as it approached the beef capital. 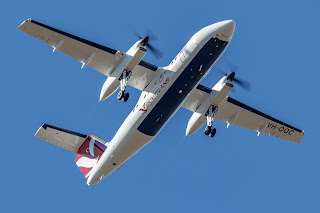 The Dash-8-100 was again VH-QQC and was operating as SKP81 from Cairns and Proserpine (Whitsunday Coast) Airports. Approaching Rockhampton Airport, the pilot reported that the nose wheel landing gear had failed to lower - as shown above.

After circling North of the Airport, the crew were able to manually lower the nose wheel and VH-QQC landed at Rockhampton Airport without incident. 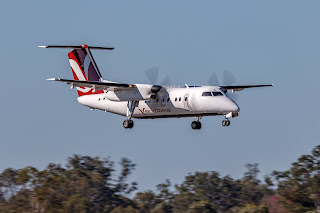 After the local aviation rescue and fire fighting (ARFF) service met the first flight the previous day with a water cannon salute, on this occasion, they were on standby should there have been any incidents on landing. 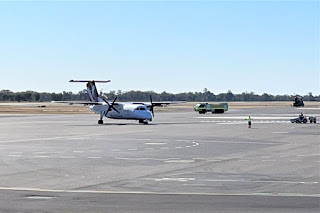 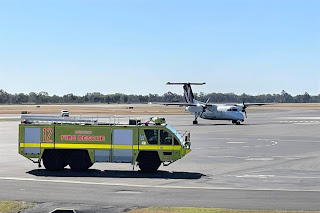 VH-QQC did not complete the return flight to Proserpine and Cairns Airports and instead departed later in the evening to Brisbane as SKP9001.

UPDATE! On Wednesday 15 September, VH-QQC returned to Rockhampton Airport from Brisbane as SKP900 before it then departed to Proserpine (Whitsunday Coast) and Cairns Airports as SKP84. There was no South-bound flight out of Cairns to Prosie and Rocky.

Sincere thanks to local photographer Steve V and local plane spotter 'IAD' for taking the time to capture and send through these photos!