An interesting visitor into Rockhampton Airport on Monday 27 September was Virgin Australia Boeing B737-800 VH-VUX. It arrived from and later departed back to Brisbane as VOZ1239/1240. 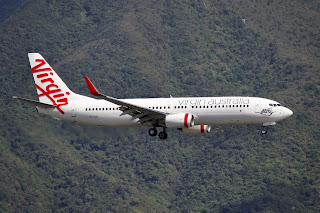 VH-VUX re-entered service with Virgin Australia at the start of this month after operating for Virgin's low cost subsidiary Tigerair Australia between October 2019 and March 2020.

VH-VUX was withdrawn from use and placed in long-term storage at Melbourne (Tullamarine) Thursday 10 June 2021 when it was finally taken out of storage and flown from there to Townsville where it was re-painted into Virgin Australia livery at the local Flying Colours paint shop. It is reported VH-VUX has again picked up its previous name of 'Nightcliff Beach'.
VH-VUX then flew from Townsville to Hong Kong (pictured) just over a week later where it underwent planned maintenance.  It then returned to Australia via Cairns and Brisbane on Saturday 10 July where it was stored until it entered service with Virgin Australia on Wednesday 1 September.

Of interest, VH-VUX was ordered by and delivered new to Virgin Blue in October 2010 and wore the name 'Ballina Ballerina'.
After Virgin Blue was renamed Virgin Australia Airlines in May 2011, VH-VUX was finally re-painted by Flying Colours in Townsville into the Virgin Australia livery in December 2014 and was renamed 'Nightcliff Beach'.
VH-VUX flew with the airline until September 2019 when it was transferred to Tigerair Australia. After being re-painted into Tigerair livery again in Townsville, VH-VUX entered service with Tigerair in October 2019.
VH-VUX is now the second B737-800 to re-join the Virgin Australia fleet with VH-YVA doing so late in 2020.
Of interest, with the Tigerair Australia brand now gone, the remaining Boeing B737-800 operated by the airline remain in storage - VH-VUB remains in storage at Melbourne (Tullamarine), while VH-VUD and VH-VOR are at Alice Springs where they are stored in the Asia Pacific Aircraft Storage (APAS) facility.
Photos taken by Ho Ting Au, 'IAD', Anthony Schulz and Tony Haynes  ©
Posted by Damian F at 10:05 PM