On Tuesday 14 September, I was at the right place at the right time to capture an iPhone photo of MacKellar Mining Equipment Pty Ltd (Revesco Aviation) Cessna 680 Citation Sovereign VH-MMC which was parked at Emerald Airport after earlier arriving from the Sunshine Coast. 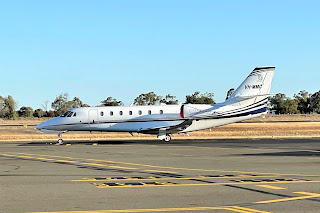 It is interesting to note that VH-MMC was recently re-painted at the General Aviation Maintenance (GAM) hangar at Melbourne (Essendon) Airport.  Looks nice!
UPDATE!  On Wednesday 15 September, VH-MMC departed Emerald Airport and returned to the Sunshine Coast.
Also visiting Emerald Airport, also on Tuesday 14 September, was Aircair Aviation (Aircair Helicopters) Cessna 340A VH-MPQ which arrived from Keytah and then then departed to Pinnarendi and Cairns.
UPDATE!  On Thursday 16 September, VH-MPQ popped back into Emerald Airport, arriving from Cairns, Pinnarendi and Townsville.  It then returned to Keytah.
And re-registered (operator) Gulf Aircraft (SGPG Air) Cessna 680 Citation Sovereign bizjet VH-PYN departed Hamilton Island Airport for Brisbane.  It had arrived two days prior.
Meanwhile, also on Tuesday 14 September, FKG Air (Redjet Aviation) Hawker Beechcraft B200GT VH-FKB flew up from Toowoomba and Archerfield to the Samuel Hill Airstrip within the Shoalwater Bay Training Area before flying back down to Rockhampton Airport for a refuel.
VH-FKB then departed to Archerfield and Toowoomba. It then flew back up from Toowoomba to Gladstone Airport and back to Toowoomba again.
UPDATE!  VH-FKB was back in CQ on Wednesday 15 September, calling into Rockhampton Airport  It arrived from Toowoomba and Archerfield and departed back to its Toowoomba base.
While Brescon (Toowoomba) Beech B200 King Air VH-WXB flew up from Toowoomba-Wellcamp to Chinchilla, Yellow Bank and Rolleston Aerodromes before then returning to Chinchilla and Wellcamp.
UPDATE!  VH-WXB was also back in the region, also on Wednesday 15 September, flying up from Wellcamp and Archerfield to Labona before returning to both Archerfield and Wellcamp again.