Also on Wednesday 29 September, Australian Army Boeing CH-47F 'Foxtrot' Chinook helicopter A15-309 was spotted at Rockhampton Airport. It looked to arrive from RAAF Base Amberley as "Easy 329". 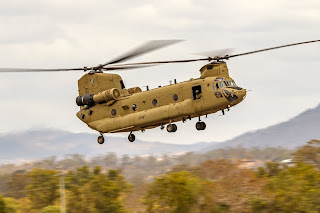 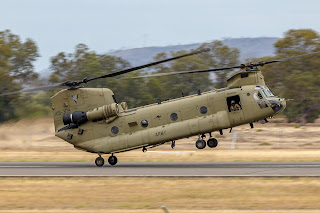 After taking on fuel, the Chinook continued up to Townsville but as "Easy 326".
As posted below, A15-309 called into Rockhampton and Maryborough Airports this time last week, where it and the crew were involved with a ceremony while on the ground at Maryborough to present a retired Army member with his Long Service Medal - see Blog post below!
Meanwhile, also on Wednesday 29 September, Royal Australian Air Force (RAAF) Alenia C-27J Spartan transport aircraft A34-002 as "Wallaby 01" flew up from Amberley to complete an initial and pitch, and then a missed approach at Rockhampton Airport before it then continued to Townsville.  After some time on the ground there, it departed to complete more airwork and landing at(?) Hamilton Island Airport before it then returned South to the Sunshine Coast and then Amberley.
Sincere thanks to local photographer Steve V for allowing us to share these great photos!
All photos taken by Steve Vit  ©
Posted by Damian F at 8:00 PM