On Tuesday 7 September, Link Airways (Corporate Air / Vee H Aviation) SAAB 340B VH-VEP was spotted arriving into Rockhampton Airport.  It touched down from Brisbane and continues the run of Link Airways SAABs or Metros visiting Rockhampton Airport each Tuesday and Wednesday (usually) on what appears to be a new series of Fly-in Fly-out (FIFO) closed charter flights 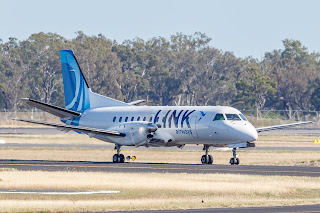 VH-VEP later returned to Brisbane.
Meanwhile, also on Tuesday 7 September, West Coast Seaplanes (Broome, Western Australia) Textron (Cessna) 208 Caravan VH-NPZ, which currently appears to be based at Bundaberg Airport, flew up once again from there to Nebo Aerodrome before it then flew down to Rockhampton Airport and back to Bundy.
Hawker Beechcraft G58 Baron VH-EZD visited Rockhampton Airport from its Monto Aerodrome base.
Beech 58 Baron VH-CUY landed at Emerald Airport from Charters Towers Aerodrome before then departing to Toowoomba.
UPDATE!  On Wednesday 8 September, VH-CUY called back into Emerald Airport from Toowoomba and Dalby before it continued back up to Charters Towers Aerodrome.
And Gulf Coast Aviation Cessna 510 Citation Mustang bizjet VH-KXM was noted visiting both Emerald and Rockhampton Airports during a busy day of flying that started at Mareeba and then Vanrook Station and ended at the Sunshine Coast.
Finally, also on Tuesday 7 September, Emerald-based Central Highlands Aerial Services (CHAS) Cessna 208 Caravan VH-LMZ flew all the way from Emerald to Adelaide via Broken Hill before then returning direct to Emerald. 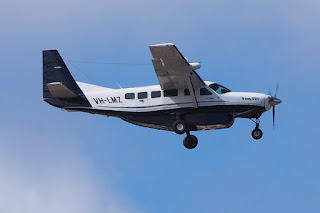 It was spotted above arriving into Adelaide Airport.
VH-LMZ was also recently spotted operating out of Jandakot Airport in Western Australia and was noted with an aerial survey antenna boom attached to the rear of the plane.
Photos taken by Steve Vit and Tony Haynes  ©
Posted by Damian F at 10:30 PM