On Friday 17 September, there was another new flight service this week for Central Queensland and in particular the Proserpine (Whitsunday Coast) Airport with Qantas / QantasLink touching down in its own right for the first time in 17 years. 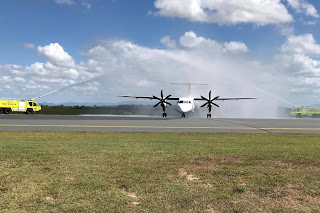 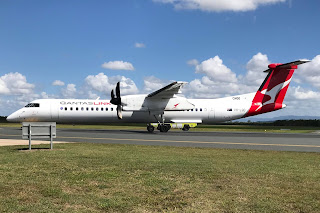 The first flight was completed by QantasLink Dash-8-Q400 Next Gen VH-LQD which operated the QLK2525/6 service into Proserpine (Whitsunday Coast) Airport from and back to Brisbane.
Celebrations were held at the Airport along with the traditional water-cannon salute from the local aviation rescue and fire fighting (ARFF) service.
Qantas / QantasLink will operate up to seven weekly return flights on the route with its 74-seat Dash-8-Q400 turboprop aircraft, adding more than 1000 seats each week.
All the best the this new route - and even more reasons to visit the beautiful Whitsundays region!
All photos taken by 'AC'  ©
Posted by Damian F at 8:36 PM