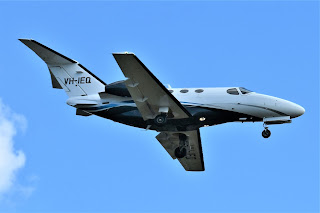 The new little bizjet looked to arrive from and later depart back to Bankstown via the Sunshine Coast.
It appears that VH-IEQ only arrived into Australia at Bankstown in mid-July this year.  The visit to Prosie is it's first visit into Central Queensland.
Meanwhile, also on Thursday 9 September, the often visiting American-registered Eclipse EA500 bizjet N257AK departed the Whitsunday Airport at Shute Harbour bound for Archerfield.
It had flown up from there on Monday 6 September.
While Machjet (Machjet International) Cessna 525 Citation CJ1 bizjet VH-SIY was noted visiting Hamilton Island Airport from its Sunshine Coast base.
And Zauner Aviation Pilatus PC-12/47E VH-FMM called into Hamilton Island Airport as well but from its Albury base.  It then departed to Mount Gambier and Adelaide in South Australia.
Finally, also on Thursday 9 September, Seair Pacific / Istlecote Cessna 208 Caravan VH-TQW was noted flying up from Hervey Bay (Fraser Coast) Airport to Middlemount Aerodrome before flying back down to Maryborough and Hervey Bay Airports.
Brisbane-based Beech 58 Baron VH-VSA called into Longreach Airport from Roma Airport before then departing to Barkley Downs.
BPW Aviation / Airspeed Aviation Beech 58 Baron VH-SQC flew up to Mackay Airport from Tamworth.  It then departed to Archerfield before returning to Tamworth.
And Pilatus PC-12/45 VH-PID was back in the region, flying up from its Toowoomba base to Biloela / Thangool, Emerald and Mackay Airports.
UPDATE!  On Friday 10 September, VH-PID departed Mackay Airport for Dunk Island, Gympie and Toowoomba.
Sincere thanks to the Sunshine Coast Plane Spotting Facebook page for allowing us to share their great photo of VH-IEQ!
Posted by Damian F at 9:52 PM