On Tuesday 14 September, Pionair Australia British Aerospace BAe-146-200 VH-SYO was spotted arriving into Rockhampton Airport. It touched down from Brisbane as 'SFZ9026' / "Skyforce 9026". 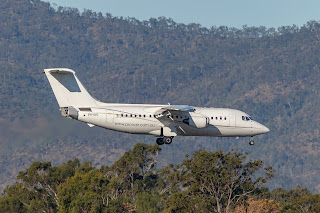 At the time of writing, it appears that VH-SYO is remaining at Rockhampton Airport for at least the night.

UPDATE! On Wednesday 15 September, VH-SYO departed Rockhampton Airport and headed all the way up to Horn Island as 'SFZ644' / "Skyforce 644" - believed to be on the 'regular' school kids charter flight. It then flew to Townsville.