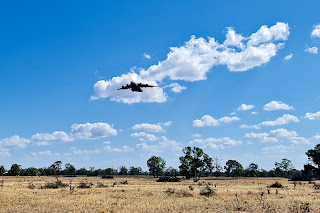 A41-211 was flying as "Stallion 57" and looked to depart RAAF Base Amberley and head up to Charleville Airport where it completed a missed approach.
A41-211 then flew further West - possibly completing more airwork at Longreach Airport (?) - before then completing a missed approach at Emerald Airport - where it was photographed above.

A41-211 then headed back South and returned to Amberley.