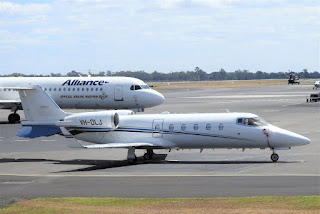 It arrived from and later departed back to Brisbane.  Reports suggest it was in town in support of the NRL game that was held in Rocky.
Meanwhile, also on Sunday 12 September, several Flight Training Adelaide (FTA) / Qantas Group Pilot Academy Diamond DA-40 Star training aircraft were noted visiting some Central Queensland Airports, all flying out of their Toowoomba-Wellcamp Airport base. 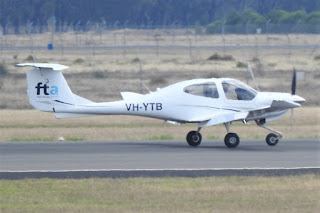 VH-YTW flew up to Hervey Bay (Fraser Coast) Airport and back. VH-YTJ flew up to Gladstone Airport and back. VH-YNV and VH-EQO both flew to Gayndah Airport - VH-YNV then flew out to Roma Airport before then returning to Wellcamp - VH-EQO returned directly to Wellcamp.  VH-YTB flew to Hervey Bay and then Rockhampton Airports before heading back to Wellcamp.  And VH-YTZ and VH-YTE flew up together to Rockhampton Airport before continuing to Mackay Airport.
UPDATE!  On Monday 13 September, VH-YTE and VH-YTZ arrived back into Rockhampton Airport from Mackay Airport before then departing to Bundaberg Airport and Wellcamp.
Finally, also on Sunday 12 September, re-registered (operator) Gulf Aircraft (SGPG Air) Cessna 680 Citation Sovereign bizjet VH-PYN was noted arriving into Hamilton Island Airport from Brisbane.  It appears to be staying for at least the night.
And ZephAir Australia - Aircraft Charters Piper PA-31 Navajo VH-AYT also visited Hamilton Island Airport but from its Townsville base.
All photos taken by John Lee  ©
Posted by Damian F at 10:32 PM