Interesting to note on Saturday 18 September that Seair Pacific operated what appears to be their recently acquired Textron Aviation (Cessna) 208B Caravan VH-TQI on one of their daily flights to Lady Elliot Island Airport. 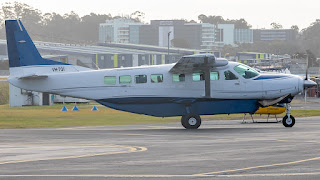 VH-TQI looked to depart its Gold Coast base for Redcliffe before heading up to Lady Elliot Island.  It then flew across to Hervey Bay (Fraser Coast) Airport and back to Lady Elliot Island before then returning to Redcliffe and the Gold Coast.
It appears that VH-TQI completed an across-Australia ferry flight last week from Broome in Western Australia via Charleville Airport (and other places) to the Gold Coast.
Of interest, fellow Seair Cessna 208 Caravan VH-LMD recently had floats applied - as shown in July below. 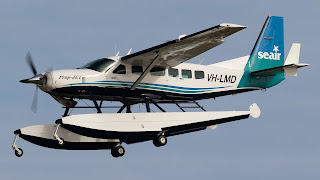 However, VH-LMD was recently noted with the floats removed once again.