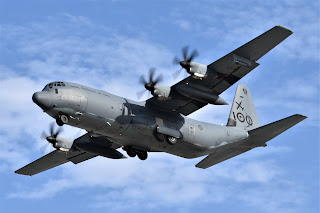 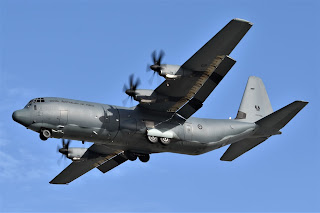 Both Hercs continued onwards to Townsville.
UPDATE!  On Wednesday 8 September, the Hercs completed airwork in the Northern part of Queensland and were spotted above returning to Townsville.
UPDATE!  On Thursday 9 September, the Hercs returned to RAAF Base Richmond, via more airwork at Hamilton Island and the Sunshine Coast Airports, plus another brief strop at Amberley.

Meanwhile, also on Tuesday 7 September, RAAF Alenia C-27J Spartan transport aircraft A34-003 as "Wallaby 40" flew to Longreach Airport from the North for airwork, before it then continued down to Roma Airport for more airwork and then to Amberley.  It appears to have flown North from Amberley earlier in the day.
All photos taken by Graham Aspinall  ©️
Posted by Damian F at 9:55 PM