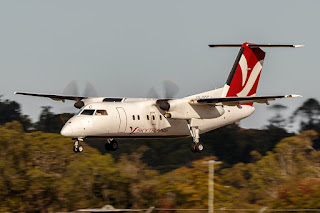 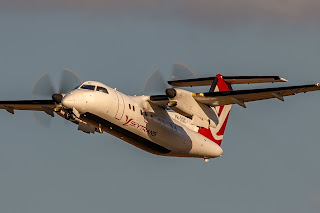 After receiving a traditional water cannon salute from the local aviation rescue and fire fighting (ARFF) services, VH-QQC taxied to parking at Rockhampton Airport and offloaded its first passengers on the inaugural flight.  It was soon turned around with some more passengers boarding to make the trek back north to Cairns again via Proserpine Airport

The SKP81/82 flights will run every week day.

Of interest VH-QQC(2) (c/n 263) is the latest 'classic' Dash-8-100 to join the Skytrans Airlines fleet which arrived into Brisbane at the start of July wearing the American registration N806EX.  It subsequently ferrying to Townsville where it was repainted before it then headed to Cairns and took up the registration marking of VH-QQC. 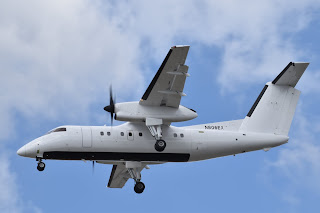 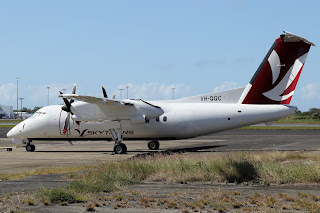 It was also placed into temporary storage at Mareeba Aerodrome during the latter part of August until Sunday 12 September when it flew back to Cairns to re-enter service with Skytrans and fly down to Prosie and Rocky!

Sincere thanks to local plane spotters Steve V and Jonathan W for allowing us to share their photos on what was a momentous occasion for Central Queensland Aviation.

We wish Skytrans Airlines all the best in this new venture and I hope one day to actually fly with them between Rockhampton and maybe Proserpine and maybe even onwards to Cairns!  All the best - good luck!
Photos taken by Steve Vit, Graham Aspinall and Jonathan Williams  ©
Posted by Damian F at 9:30 PM