AirServices Australia / Aero Pearl-operated Hawker Beechcraft B300 Super King Air VH-FIZ touched down at Gladstone Airport from Brisbane on Tuesday 29 May.  Again, VH-FIZ was using the flight number ADA4 and the radio callsign of "Auscal 4". 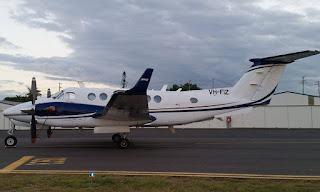 VH-FIZ then departed Gladstone Airport for Brisbane on Thursday 31 May.

Employing more than 4000 staff, approximately 1000 personnel are dedicated to air traffic control alone working from two major centres - one in Melbourne and another in Brisbane - as well as 29 towers at other international and regional airports across Australia.

Of interest, Australian airspace covers approximately 11 per cent of the earth’s surface and includes continental Australia, territorial waters and international boundaries over the Pacific and Indian Oceans.  Airservices Australia also manages upper-level airspace (above 30 000 ft) under contract to the neighbouring Pacific Island Flight Information Regions of the Solomon Islands and Nauru.

With approximately 500 navigational aids (NAVAIDS) throughout the country, Airservices Australia is tasked with testing and calibrating these vital pieces of equipment on a three-year rotational basis to ensure they remain within the required high tolerances.

Using three-dimensional laser measuring equipment and GPS technology, information from the navaid is relayed to an aircraft and interpreted by specialist aircrew.  The data is then analysed by Airservices maintenance engineers to ensure each navaid is operating accurately.