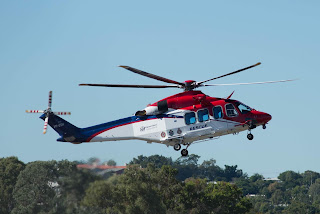 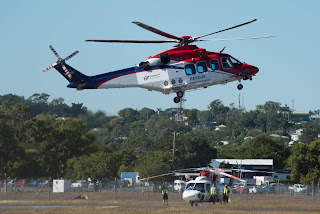 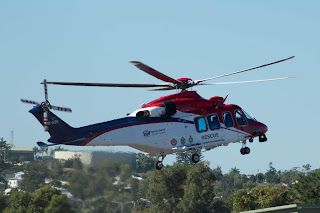 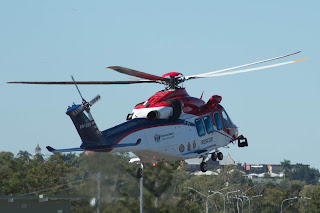 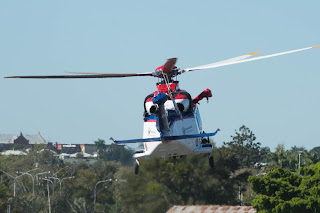 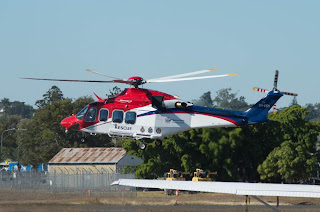 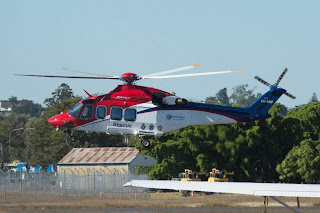 After taking on fuel, VH-ESH continued to Townsville and then Cairns.

Of interest, VH-ESH has been operating around Brisbane and the South-East corner of Queensland in recent days as "Rescue 500".

I presume it has ferried into Cairns to replace the current QGAir Rescue AW139 chopper VH-ESZ which is currently operating as "Rescue 510".  VH-ESZ should ferry South in the coming days as a part of their maintenance 'rotational system'.

This is reportedly designed to ensure the even distribution of flying hours on each of the QGAir Rescue helicopters, thus avoiding the need to have multiple helicopters offline for simultaneous scheduled maintenance.

UPDATE!  As posted above, on Wednesday 23 May, VH-ESZ indeed ferried South from Cairns via Townsville and Rockhampton Airports to Archerfield.

Sincere thanks to local plane spotter Scott H who was at the right place at the right time to capture these photos of VH-ESH arriving into Rocky!

All photos taken by Scott Harris  ©
Posted by Damian F at 9:22 PM