On Sunday 13 May, Cessna 208B Caravan VH-IOV called into Rockhampton Airport.  It arrived from the Gold Coast via stops at Cessnock (New South Wales) and Biloela / Thangool Airports.  After a short time on the ground, VH-IOV was spotted departing Rockhampton Airport for the Gold Coast, although it was noted to complete a missed approach at Gladstone Airport on the way down. 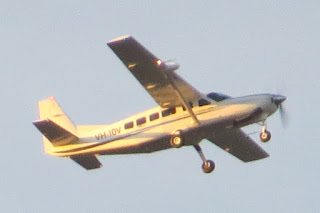 The latest Civil Aviation Safety Authority (CASA) register update indicates that VH-IOV is registered to Blue Sky Airways in New South Wales.  It was interesting to note however, that the pilot kept referring to the aircraft by a different aircraft registration which is currently operated by Seair Pacific / Istlecote on the Gold Coast.  Perhaps this is a new aircraft for the Seair?

All photos taken by Kayanne Hardsman  ©
Posted by Damian F at 8:56 PM