Certainly an interesting visitor into the Fraser Coast region on Friday 18 May was Alliance Airlines latest Fokker F-70 VH-KBX. 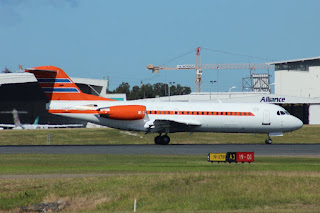 It initially completed the short hop from Brisbane (where it is pictured above) to the Sunshine Coast as UTY580 before it then departed on a test flight North towards the Fraser Coast.  It is believed to have flown up to Maryborough and then Bundaberg before turning around and returning to the Sunny Coast as UTY582.

VH-KBX then returned to Brisbane as UTY583.

Of interest, VH-KBX was delivered to Alliance Airlines in August 2017 after it operated for 11 years for the Government of the Netherlands as PH-KBX.  It is believed to have flown Dutch Government representatives and members of the Dutch Royal Family including to Australia on multiple occasions.