After being spotted at Rockhampton Airport late last week, new Archerfield-based SOCATA TBM 700 N700BK has been spotted and noted this week calling into some CQ Airports.

After arriving from Rockhampton Airport, N700BK was spotted by me at Emerald Airport on Saturday 12 May.  It then departed to Bundaberg Airport and Toowoomba. 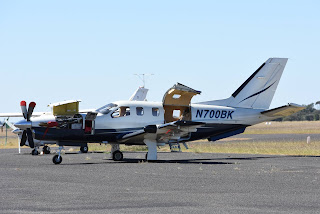 Then late on Sunday 13 May, N700BK was again heard to be flying within CQ with believed to have landed at Moura Airport where it stayed for the night.

UPDATE!  On Thursday 17 May, N700BK was again heard visiting Moura Airport where it departed to some station before continuing to Dalby and Emerald Airport.  It is then believed to have departed further to the North-West.
Posted by Damian F at 9:53 PM