As we reported below, a very rare visitor called into Gladstone Airport on Monday 15 December in the form of QantasLink (Cobham Aviation) Boeing B717-200 VH-YQW. 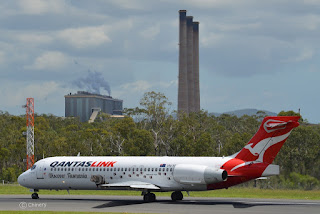 Local plane spotters Jamie and Tash were also on hand and send through some fantastic photos that they captured. 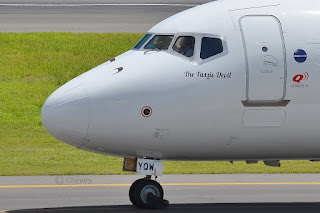 This was the B717's first visit to Gladstone, days after its début appearance up the road at Rockhampton.  VH-YQW operated the scheduled QJE1704/1705 service from and back to Brisbane, presumably in place of fellow B717-200 VH-NXJ which has only just departed Rockhampton Airport this morning after breaking down over the weekend.

VH-YQW is one of five B717-200s in a 2-class configuration with 125 seats, along with Q-Streaming - Qantas' wireless entertainment system.

Sincere thanks to Jamie and Tash for capturing and sending through these fantastic photos!