A couple of familiar bizjets touched down at Rockhampton Airport on Monday 24 August.  First to call in from Brisbane as the Queensland Police Service (Airwing) Cessna 560 Citation Ultra bizjet VH-PSU. 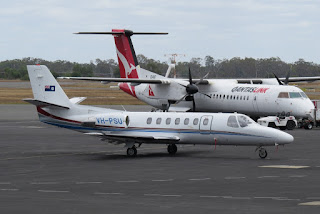 After spending much of the day parked on the Rockhampton Airport apron, it departed North to Mackay where it looked to be spending the night.

UPDATE!  VH-PSU returned to Brisbane from Mackay on Tuesday 25 August.

Also arriving into Rockhampton for another visit on Monday 24 August was Light Jets Australia Cessna 525 Citation CJ1 VH-TFW which on this occasion, touched down directly from its base at Archerfield. 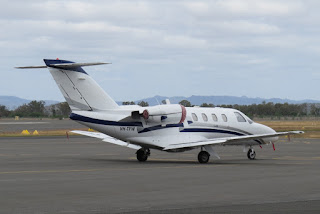 It was parked on the General Aviation (GA) Apron at Rockhampton Airport and looked to be spending the night.

Finally, of interest, the Queensland Government Airwing (State of Queensland) Raytheon Hawker 850XP bizjet VH-SGY made a visit to Rockhampton in the very small hours of Saturday 22 August.  It arrived from Brisbane and departed back there around sunrise.  This was possibly one of the many medical retrieval flights at the Government jet also operates.

Thanks to local plane spotter 'IAD' for capturing these two great photos!