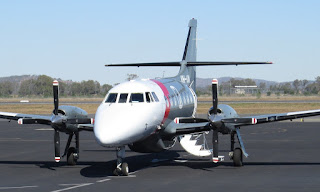 As mentioned below. VH-OAM looks to be on a closed charter flight, starting at De Bruin's home Airport of Mount Gambier in South Australia.  It has since made stops at Melbourne (Essendon), Merimbula, Newcastle and Balina / Byron Gateway Airport in Northern New South Wales. 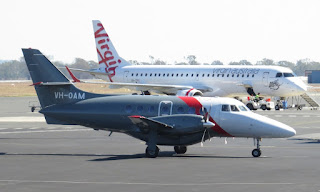 After taking on fuel, the passengers re-joined the aircraft - after a group photo - and VH-OAM departed North to Townsville.  It was later noted heading to Cairns.

While she was at Rockhampton Airport on Saturday 8 August, local plane spotter Kayanne H also managed to capture some photos of Surveillance Australia / Australian Customs and Border Protection Service (Cobham Aviation) Dash-8-202 VH-ZZC as it departed on a sortie as "Customs 33".

Thanks Kayanne for taking the time to capture and send through these great photos of a couple of great visitors to Rocky!

All photos taken by Kayanne Hardsman  ©
Posted by Damian F at 9:23 PM