'Snifter' was making its way from Caboolture to Mackay where it will be operating joyflights over the weekend, as well as being the star attraction at the Mackay Aero Club's Wings and Wheels Day this Sunday 16 August.

It was reportedly forced to land at Rockhampton to take on fuel after problems were encountered with refuelling the Mustang at Bundaberg Airport.  It had also planned to operate a pair of joyflights while at Bundaberg on Thursday 13 August. 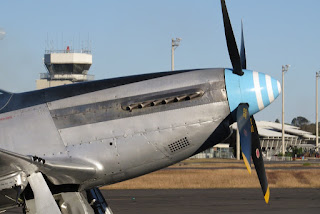 After taking in fuel - and being the subject of numerous photos by and with local Airport operators - VH-MFT departed North to Mackay where 'Snifter' landed around 5pm.

VH-MFT remains parked near the Mackay Aero Club at Mackay Airport and is set to take to the skies of Mackay on Friday 14 August!  Make sure you keep an ear and an eye out for this spectacular old warbird!

All photos taken by Kayanne Hardsman  ©
Posted by Damian F at 9:28 PM