A couple of helicopter visitors were captured at Gladstone Airport on Saturday 15 August with Corporate Aviation Bell 429 Helicopter VH-EQP calling in from its Southport base while heading North to Hamilton Island. 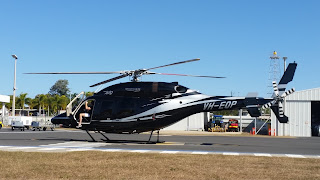 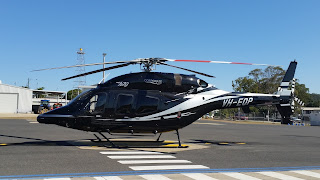 Careflight (Queensland) Bell 412EP VH-XCK was also captured as it was undergoing a morning engine run.  VH-XCK has spent the last month at Gladstone acting as 'cover' while the normally locally-based Careflight Bell 412EP VH-XCY was in for maintenance at Archerfield. 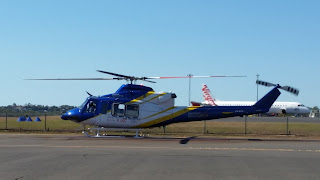 It was expected that VH-XCK would depart South soon after, however a reported problem with VH-XCY meant that VH-XCK was due to depart to Toowoomba on Sunday 16 August.

Finally, it's worth noting that over Saturday 15 August and Friday 14 August there were a couple of interesting light General Aviation (GA) aircraft to also call into Gladstone Airport including Hervey Bay-based Aero Commute Australia (ACA) Cessna 402A VH-RDZ, New South Wales based Cessna 210 VH-KTE and Blackwater-based Beech B58P VH-BLT.

UPDATE!  Information suggests that Cessna 210 VH-KTE has in fact recently taken up residence at Gladstone Airport and is registered to a locally-based Engineering firm.