As mentioned below, Skytrans Airlines Dash-8-100 VH-QQG called into Gladstone Airport on Sunday 2 August, touching down from Rockhampton as SKP200.  It was noted to be carrying the Cairns Marlins and Dolphins men's and women's basketball teams. 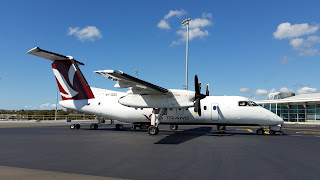 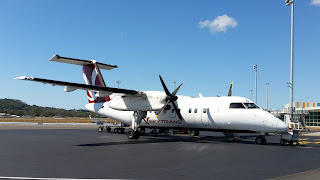 Local plane spotter Michael F ventured to Gladstone Airport twice over the weekend and captured some great photos of some of the action including VH-QQG which looks resplendent in the new Skytrans titles and colours.

It later departed to Cairns as SKP201.

Another aerial survey aircraft was captured by Michael resting on the Gladstone Airport General Aviation (GA) apron on Saturday 1 August in the form of recently re-registered and re-branded Australasian Jet (AusJet) Cessna 206 VH-KPG.

It previously was operated by Fugro Spatial Solutions.

Parkes (New South Wales) based AFS Charter Piper PA-31 VH-CYV was also captured by Michael on Saturday.  It had earlier called in from Charters Towers.

VH-CYV has since departed to Archerfield and Parkes on Sunday 2 August.

One other notable aircraft spotted back in the Gladstone Airport GA Apron was the 'resident' Air Charter CQ / Australia by Seaplane DHC-2 Beaver VH-IDO which returned from a maintenance lay-up at Mackay on Saturday 1 August.

Finally, the highlight of Michael's plane spotting over the weekend was capturing a couple of great photos of the visiting Royal New Zealand Air Force (RNZAF) NH90 helicopter NZ3304 which touched down on Friday 31 July. 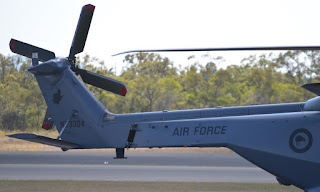 During the afternoon on Saturday 1 August, NZ3304 departed Gladstone Airport for the HMNZS Canterbury multi-role vessel which was docked at Gladstone Port.  NZ3304 joined NZ3303 on the Canterbury for transport back to New Zealand following the helicopters' participation in the recently completed Exercise Hamel and joint Military Exercise Talisman Sabre 2015.

Sincere thanks to Michael for taking the time to capture and send through these great photos from a great weekend of plane spotting at Gladstone!

All photos taken by Col and Michael Fleetwood  ©
Posted by Damian F at 10:48 PM