Skytrans Airlines Dash-8-100 VH-QQG was captured on the ground at Rockhampton Airport on Saturday 1 August after earlier arriving from Cairns as SKP200. 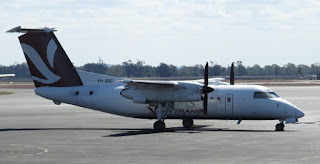 VH-QQG is one of the four re-branded Dash-8-100 aircraft that the 'new' Skytrans is operating on scheduled services around the Gulf-country out of Cairns - VH-QQA, VH-QQB and VH-QQI are the others. 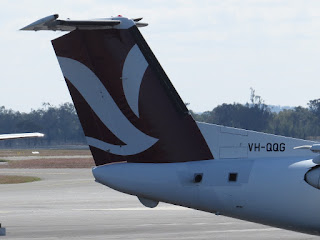 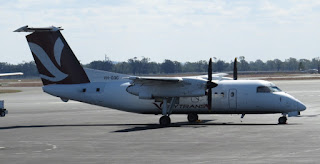 On Tuesday 31 March, Skytrans returned to the skies under the ownership of Collings Holdings Airlines which owned by Peter Collings, who also runs owner of West Wing Aviation, and Rugby League player Johnathan Thurston.

The end of operations came a day after the carrier marked its 25th anniversary of Queensland services - outback and regional Queensland, the Gulf country and Cape York services in particular.

Thanks to local plane spotter Kayanne H for venturing to Rockhampton Airport and capturing these great photos!