A surprise visitor at Emerald Airport early on Wednesday 12 August was Pel-Air SAAB 340A Freighter VH-KDK. 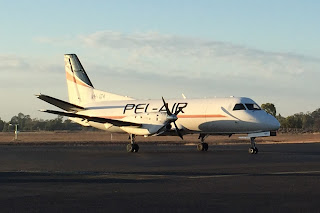 It had arrived from Brisbane after being unable to land at Rockhampton Airport due to fog that engulfed the beef capital.  VH-KDK departed to Mackay shortly after the sun rose as PFY7418.