At Gladstone Airport on Wednesday - Challenger Bizjets VH-URR and VH-BLM - A Diversion - And More!

Wednesday 12 August was a busy day at Gladstone Airport with a few interesting visitors calling in amongst the commercial movements.

A couple of visitors before dawn included a diversion from a fog-bound Rockhampton Airport with Toll Freight Metro 23 VH-HPE calling in as TFX132 from Brisbane.  It later departed direct to Richmond and Mount Isa again as TFX132.

A nice pair of bizjets called in on Wednesday 12 August, with Careflight Bombardier CL-600-2B16 Challenger 604 bizjet VH-URR "Ambulance 604" touching down from Brisbane in the very small hours of the morning.  It departed just before dawn back to Brisbane - waking up the neighbours! 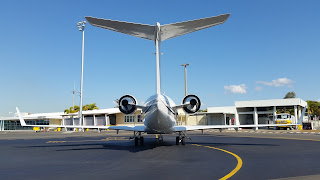 Later, Business Aviation Solutions Bombardier CL-600-2B16 Challenger 604 bizjet VH-BLM also called into Gladstone Airport.  It touched down from the Gold Coast and spent a good portion of the day parked on the Airport Apron. 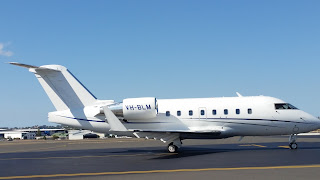 It was captured shortly before it departed back to the Gold Coast.

While a couple of aircraft that have been parked at Gladstone departed on Wednesday 12 August with Cirrus SR-22 VH-YDM departing to Archerfield after arriving earlier in the week, and Brisbane-based Aero Commander 500-U VH-LRI departed to the Sunshine Coast.  It has arrived just over a week ago.