Soon to be Virgin Australia controlled Tiger Airways Australia has this week been rebranded as Tigerair. 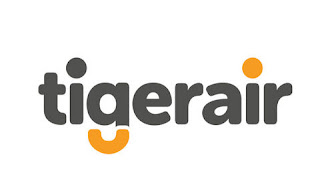 The airline’s first Airbus A320 to feature a revised livery and logo - VH-VNQ - was unveiled at Melbourne Airport this week.  Central Queensland plane spotters can watch out for VH-VNQ at Mackay where Tigerair operates 3-4 weekly flights from Sydney and Melbourne each week.

The name change and dropping the leaping Tiger logo for large ‘Tigerair’ titles promises to be the first step in the airline’s rebranding and repositioning as it comes under Virgin Australia control and seeks to move on from the brand damage caused by its 2011 grounding, turn around heavy financial losses, and grow to become a more aggressive competitor to Jetstar in the Australian low cost airline market.
Posted by Damian F at 4:33 PM