QantasLink (Cobham Aviation) Boeing B717-200 VH-NXE made a smoky and bumpy arrival into Gladstone from Brisbane as QJE1712.

After some time to start the number 2 engine, VH-NXE eventually departed back to Brisbane as QJE1713. 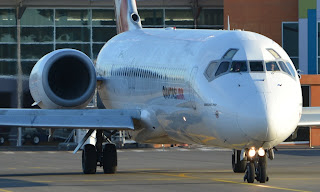 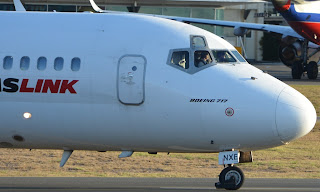 Virgin Australia Regional Airlines ATR 72-600 VH-FVN was captured touching down as VOZ1715.  Sources indicate that VH-FVN was then closed up and looked to be staying at Gladstone for the night. 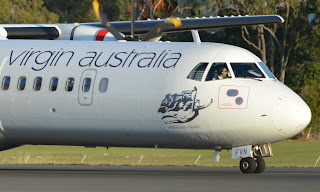 VH-ZPB later departed back to Brisbane as VOZ1720.

QantasLink (Cobham Aviation) Boeing B717-200 VH-NXK then made a spectacular arrival just on dusk as QJE1714 from Brisbane.

Rounding off a nice afternoon and evening of commerical movements was the departure of QantasLink Dash-8-Q400 VH-QOF as QLK2307 to Brisbane.

As the sun disappeared over the horizon, Michael stayed to capture the departure of McNab Aviation Cessna 414A VH-FKH to Toowoomba.

Sincere thanks to Michael for sending through these awesome images of a wonderful afternoon of plane spotting at Gladstone Airport!

All photos taken by Michael Fleetwood  ©
Posted by Damian F at 6:49 PM