Yet More Plane Spotting Photos from Gladstone Airport Before Christmas 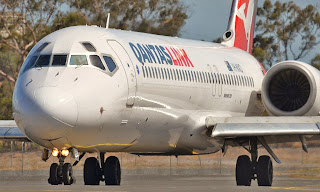 In the days leading up to Christmas, Gladstone Airport came alive with Private Dassault Falcon 900EX bizjet N47EG visiting, along with multiple Fly-in Fly-out (FIFO) charters popping in - including the first ever Qantas Boeing B737-800 VH-VZY to visit Gladstone.

There were also numerous other additional flights put on by QantasLink and Virgin Australia, with the highlight being the visit by two Virgin Boeing B737-800s - VH-YFF and VH-YFQ.

But there have also been several other movements into Gladstone over recent days that have been captured by local plane spotters Michael F, Jamie C and Tash C.

VH-NXQ was also captured by Michael making a spectacular arrival back into Gladstone later on Monday too!

In fact, VH-NXQ had visited Gladstone quite a lot over the weekend too! 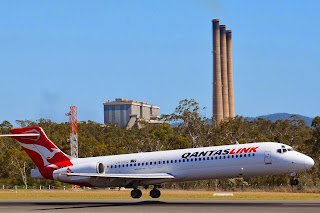 A little earlier in the week, sister-ship B717-200 VH-NXN was captured making a spectacular visit into Gladstone as well.

QantasLink Dash-8s have also been frequent visitors to the industrial city over the busy pre-Christmas period.  There was a good mix of Dash-8-Q300 and Dash-8-Q400 turbo-props. 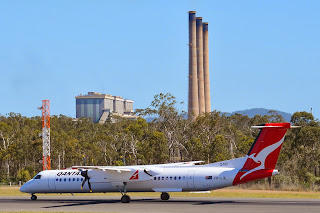 As one Dash-8 taxied out recently, the ever present Gladstone-based Careflight Bell 412EP VH-XCY was captured performing an engine-run. 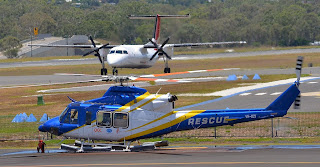 Sincere thanks to Michael, Jamie and Tash for capturing and sending through these fantastic images from Gladstone Airport.

One would of course assume that if there were so many movements - including the larger aircraft - were made before Christmas, then there should be a similar amount of movements early in 2014!