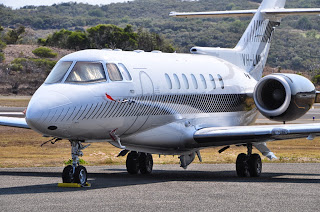 A nice start to a new week of bizjet movements.  With last week being pretty quiet, it has been great to see not only the MJets (Thailand) Gulfstream G-V HS-WEH call into Gladstone Airport on Saturday 30 November (as shown below), but also a couple of more interesting local bizjets pop into some Central Queensland Airports - including my local 'drome at Clermont!


On Monday 2 December, Shortstop Jet Charter British Aerospace BAe-125-1000B bizjet VH-LMP started what has turned out to be a very interesting series of flights, starting with a flight from Melbourne (Essendon) to Rockhampton.


Local plane spotter 'IAD' captured the nice little BAe-125 as it departed Rocky for Bundaberg.  From Bundaberg, VH-LMP flew to Hervey Bay, and then on to the Sunshine Coast where it stayed for the night.  On Tuesday, VH-LMP has continued south to the Gold Coast, and looks to be overnighting at Balina / Byron Bay Airport, before it seems to be continuing South - slowly - via most major towns and cities in New South Wales.

On Tuesday 3 December, I had great delight to spot Mackellar Mining Equipment / Flight Options (Australia) Cessna 560 Citation Ultra bizjet VH-MMC at Clermont Aerodrome.  It had flown in from Bankstown, after positioning there from the Sunshine Coast the previous day.  It later departed back to Bankstown and the Sunshine Coast. 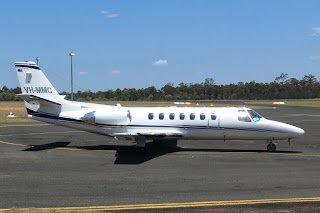 VH-MMC continues to be a frequent visitor to these parts in the Central Highlands of CQ, with the Citation Ultra visiting Emerald Airport again from the Sunshine Coast on Saturday 30 November.  It departed back to the Sunny Coast on Sunday 1 December.

The Queensland Government (State of Queensland) Airwing Raytheon Hawker 850XP bizjet VH-SGY called into Mackay Airport from Brisbane on Tuesday 3 December.  It later departed to Charters Towers, before returning to Brisbane later in the day.

Also at Mackay, locally-based Raytheon 390 Premier 1 bizjet N7088S flew to Brisbane and back to Mackay on Monday 2 December.
Posted by Damian F at 7:46 AM