The scheduled testing of the recently installed Instrument Landing System (ILS) at Gladstone Airport over last weekend didn't eventuate, with the aircraft due to conduct the testing seemingly breaking down and not taking to air while at Gladstone Airport. 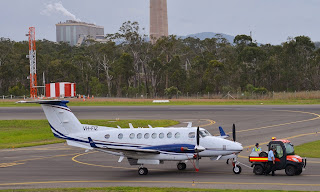 AirServices Australia / Aero Pearl flight calibration Hawker Beechcraft B300 Super King Air VH-FIZ ferried into Gladstone from Brisbane on Friday 29 November, and according to one website, was scheduled to operate two calibration flights of the new ILS system at Gladstone Airport on Saturday 30 November.

However, as these images captured by local plane spotters Jamie C and Tash C show, VH-FIZ did not take to air at all, and was instead towed into the old Australian Helicopters hangar at Gladstone Airport for some sort of maintenance attention. 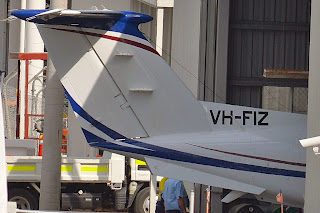 Then, on Sunday 1 December, VH-FIZ emerged from the hangar and departed Gladstone, returning to Brisbane.

VH-FIZ is one of four King Airr aircraft that AirServices Australia operates to calibrate the Instrument Landing System (ILS) and other navaids at airports around Australia.  VH-FIZ was heard to be using radio callsign of "AusCal 4" / ADA4 during its visit.

Thanks to Jamie and Tash for sending through these fantastic images from Gladstone!