As we reported below, Alliance Airlines Fokker F-70 VH-QQV operated its first flight into Central Queensland on Tuesday 3 December, flying into Gladstone Airport on a Fly-in Fly-out (FIFO) charter flight as UTY654. 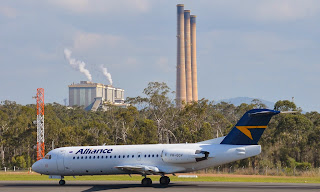 Local plane spotter Tash C captured some lovely images of this great aircraft as it departed Gladstone Airport early on Wednesday 4 December for Brisbane as UTY655.

Since it delivery to Alliance in Brisbane some time ago, VH-QQV has undergone prolonged maintenance in the Alliance hangar in Brisbane.  Part of this maintenance was to add the Long Range fuel tanks - VH-QQV is actually designated as a F-70LR. 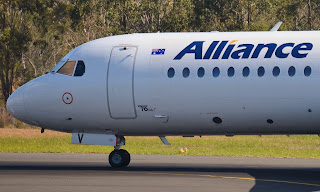 Also spotted by Tash departing Gladstone early on Wednesday 4 December was Alliance F-100 VH-XWS.  The all-white F-100 departed Gladstone as UTY651, also having arrived the previous evening but as UTY650. 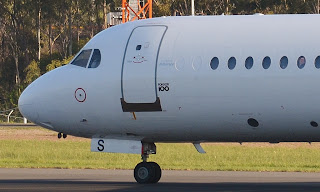 A couple of great aircraft to pop into Gladstone - and we sincerely thank Tash for capturing the action and taking the time to send these great photos through!  It's been a hard week to Tash - and Jamie - and we are really appreciative of their efforts to continue bringing the action from Gladstone!  Thanks guys!